Beth Duff-Brown interviewed me for the Associated Press: http: //huff.to/1Mc7N65

Chris Lukather of The Writing Disorder inteviewed me in general.

San Francisco Chronicle: about getting ready to retire

Poets & Writers: about not retiring

Our Special Correspondent: How old are you anyway?

I’m 71 years young. [As he utters this pathetic euphemism, the author retches.] But “old” is just a label, it’s not who I am. Still, coming out as an old man has liberated me.

How about the “junker” part?

A major contributor once offered to donate a beat-up car. In the event, it was so beat-up no one would pay anything for it, so I had to decline the gift. I blogged on that tragedy one day, and, when I was distilling the book, I discovered that post and thought the phrase apt. I’m pretty beat up and not worth much.

I suppose you got “junkman” as a kid.

My father got beaten up as a kid during the First World War because he was a Hun. I spent the summers of WWII with my grandmother in a German enclave/resort on Long Island. She’d sing me to sleep with German lullabies.

And the subtitle: A Senior Represents?

“Senior” is the polite word for old person. “Represents” means to stand for, or stand up for, your hood. And that’s what I try to do.

So, basically, you’re a Norteno?

No, I’m an Easterner. I’m from New York. And we never forget the Old Country. Nothing out here is ever quite as good as it used to be back there. So I’ve always been a disgruntled and semi-desperate displaced person.

And the pumpkin outfit you’re wearing on the back cover? 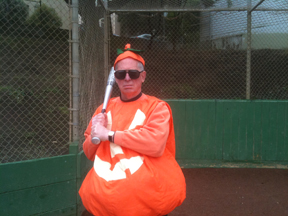 It’s to honor my in-laws in North Dakota, where I bought it for one dollar at the Cavalier Used Store. I wear it on Halloween. I used to wear a Detroit Lions sweatshirt with the name PLIMPTON on the back, because the great editor of The Paris Review, George Plimpton, once wrote about playing QB with the Lions. But after he died, the allusive value was lost. The pumpkin stays in the picture; everyone gets it.

And the baseball bat you’re holding; you look like you know what you’re doing.

I used to play a lot. I miss it. That’s one of the bad things about getting old. You can’t play as much. But on the other hand, you don’t have to work at all, so it balances out.