Dugald Stermer drew a zyzzyva for the cover of the first issue; he had no idea what a zyzzyva looked like, but nobody else did, either. He thought maybe something weevilesque. 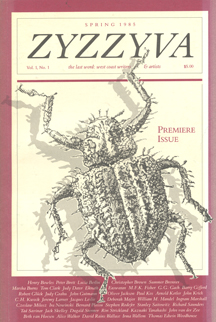 I asked him to design the entire format, but he said he was too busy and recommended—a brilliant suggestion—Tom Ingalls.

Dugald also allowed me to play in his on-going Monday night softball game in the park above Fort Mason that he’d started to have some fun with his sons. My career was on the downside then, but I really enjoyed hanging out with Dugald and the crew.

May he rest in peace.